DEED started out as two musicians from the same town, running the circuit on different musical projects on different stages all over Germany. Spending regular evenings at our favourite watering hole, contemplating all things musical, the two discovered that they shared a strong desire to overcome the boundaries of our often fixed-style musical environments and just let creativity run free to coalesce into whatever may come. 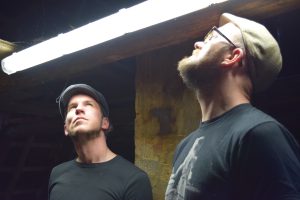 One of those nights, one guy said to the other: „Man, it would be great if we could start a project where we could play whichever songs come pouring out. Don’t care if it’s metal, or pop, or whatever drawer stereotype there is, as long as we mean what we write. That would be really cool.“ And the other guy, lo! took he a hearty quaff from his tankard of ale, and wipe the foam from his lips he did, and thusly he spake: „Yeah man, why don’t we? Let’s do this!“

And thus, DEED was born.

In the times of multi-instrumental stars on social media, of singer/ songwriter duos swarming the clubs, of hip-hop selling street cred for fly cribs and of music being reduced to a product, DEED sets out to revisit the essentials: the song and the energy. And the freedom to play – whatever and no matter how long. Because there is no other way.